Two AARC members are already getting the job done.

Michael Hess, BS, RRT, was on hand in Washington, D.C., when the Action Plan was introduced, and he and his organization believe strongly that implementing the goals will require RTs to step outside of the four walls of the hospital.

“As Dr. Byron Thomashow, chair of the COPD Foundation Board of Directors, said at the release of the Action Plan, ‘This disease has to live in primary care,’” Hess said. “That means RTs have to be more aggressive in seeking out roles in the outpatient world.”

According to Hess, the Homer Stryker M.D. School of Medicine at Western Michigan University in Kalamazoo, where he serves as a chronic lung disease coordinator, is committed to improving the way COPD is detected and managed throughout primary care, and his job is a direct result of that mindset.

By placing Hess in their primary care clinic, they are assuring patients and physicians have immediate access to high-quality spirometry, patient assessment, care plan evaluation, and even inhaler/medication education.

“We also create an individualized COPD Action Plan for each of our COPD Clinic patients, which they can use as a reference for symptoms and for their disease management plan,” Hess said.

Patients are advised to follow up with their RT on an ongoing basis to ensure they are on the right track, and to receive other services they need, such as tobacco cessation counseling, pulmonary rehabilitation, and sleep testing and treatment.

Hess and his group presented a poster outlining the clinically significant improvements in COPD Assessment Test scores they saw after just two months of RT-driven coordination and education at the recent COPD10USA conference in Chicago. He has authored a paper on the major practice implications resulting from the Action Plan for an upcoming edition of RESPIRATORY CARE as well.

At Intermountain Healthcare in Salt Lake City, UT, Kim Bennion, MHS, RRT, CHC, and her team have a number initiatives in place that mesh well with the Action Plan goals.

“With CMS adding COPD as a core measure, we realized early that as RTs, we could sit back and wait to be told what to do, or we could be the drivers,” Bennion said. “We chose the latter.”

The end result: A COPD Playbook that includes specific actions targeting all five of the Action Plan goals.

Bennion says Goal 1 is being addressed through partnerships with existing community organizations to provide early education regarding tobacco prevention and cessation, and RTs also lead PFT machine calibration across the system for accurate and earlier PFT testing.

Plans are in the works to train RTs as certified Advanced Care Planning discussion facilitators as well.

“In doing so, early and frequent conversations regarding disease education, triggers, and disease prognostication will assist clinicians in understanding and honoring patient care choices,” Bennion said.

An update of their COPD Care Process Model, which is a standard of care based on GOLD criteria, fulfills the objective laid out in Goal 2. The model will be hardcoded into EMR referrals to include, but not be limited to, pulmonary rehabilitation, dietary, sleep studies, tobacco cessation, and behavioral services.

The team is also planning a 2018 integrated care conference with a focus on COPD.

Bennion believes Goal 3 and 4 are being covered by a risk stratification tool in the EMR, and the team will submit a manuscript for publication soon that includes the use of simple blood work to predict risk for hospital readmission and mortality. They are researching an EMR predictor for timely palliative care referrals as well.

A Respiratory Care Home Care program that was just accredited by The Joint Commission fits well with the public health objective set out in Goal5. The pilot project involves the use of RTs to follow-up with high risk COPD patients in their own homes, and initial outcomes have been stellar.

“To date, none of the included patients have been readmitted for over a year,” Bennion said. “Our goal is to report outcomes to CMS to show the impact of high quality, evidence-based respiratory care provided in the home.”

RTs at the center

Bennion believes everything being done in her facility points to the vital role RTs play in the care of COPD patients and feeds right into the COPD National Action Plan goals.

“I think the most important notation is that in most of our initiatives, respiratory care is leading the charge,” Bennion said. “We are breaking down silos and have found that ‘we are stronger together.’”

Michael Hess agrees RTs are the key to successful implementation of the Action Plan and circles back to the primary care mandate.

“With the increasing time crunch many primary care providers are under these days, we feel that RTs are the best way to give those PCPs the 20 minutes they wish they had to spend on detailed education and customized disease management, and we hope to serve as an exemplar for other organizations to integrate respiratory care into their practices,” Hess said. 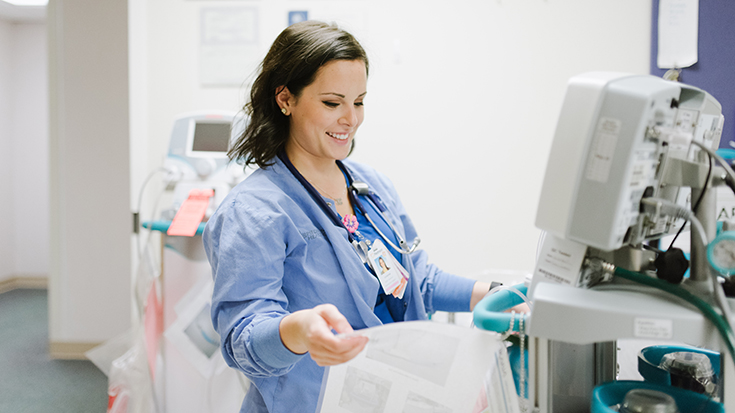