The AARC and the entire respiratory care community were saddened to learn that Brad Leidich, MSEd, RRT, FAARC, passed away suddenly in mid-June. A former president of the Commission on Accreditation for Respiratory Care (CoARC), Leidich was known far and wide for the contributions he made to the educational arm of the respiratory care profession. Brad Leidich was a leader in the respiratory care education community.

RESPIRATORY CARE Managing Editor Dean Hess, PhD, RRT, FAARC, says his professional association with Leidich dates back 50 years, to the time when he was hired to work as an “on the job” trained RT at Harrisburg Hospital in Harrisburg, PA. Leidich was already in that role but was leaving soon to attend a formal respiratory therapy educational program in Lancaster, PA.

“Everyone commented on how smart was Brad and he would make a big impression on the profession someday,” said Dr. Hess. “That was an understatement.”

After graduating from the program, Leidich worked at Harrisburg Polyclinic Hospital and Lehigh Valley Hospital Center, but soon took on a program director position Leigh County Community College, setting the stage for his career-long devotion to respiratory care education.

He went on to earn his bachelor’s degree from Penn State University and his master’s from Temple University.

Dean Hess — who would follow Leidich to that same formal education program a year after they met — was impressed by his ability to keep value top of mind in everything he did. “Brad had an unwavering commitment to excellence,” he said. “He set the highest of standards for himself, his students, and everyone around him.”

Leidich was also an active member of the AARC and served the Pennsylvania Society for Respiratory Care (PSRC) and its forerunners in many capacities over the years. “Brad and I both became involved in our Central Pennsylvania Chapter of the AARC, which was one of three chartered affiliates in our state before the PSRC was formed,” explained Garry Kauffman, MPA, RRT, FAARC, FACHE. Brad Leidich, left, and Garry Kauffman get ready to take the kayaks out during the Respiratory Therapists and Friends Float Trip.

Leidich went on to serve as president of the PSRC and delegate to the AARC House of Delegates. He made it a point to advocate for respiratory care at the state legislature whenever an issue arose with the potential to impact the profession as well.

“Brad lived near the state capital, as did I, so whenever there was a legislative meeting or event, we both showed up in our Sunday best clothes to talk with legislators as to why RTs were needed,” recalled Kauffman. ”He continued to mentor and educate many RTs far after their graduation and was a continuing source of commitment and support for our state society and our profession.”

Kauffman was continually amazed by the level of commitment he had to his professional organizations. “Brad always put his profession foremost in whatever he was engaged in,” he said, recalling one incident where he, Leidich, and Bill Galvin, MSEd, RRT, CPFT, AE-C, FAARC, were doing a moderated panel discussion at an AARC Congress and they got a text from Leidich letting them know they would need to find a substitute for his part.

The text was sent from his hospital bed, where he was in the process of dealing with complications from a heart attack. “If that doesn’t show commitment, I don’t know what does,” said Kauffman.

Galvin also met Leidich through their mutual work with the Pennsylvania Society for Respiratory Care and remembers “talking shop” with him for hours whenever they got together for state meetings or to work on committees or task forces. Two long-time friends and colleagues load up the gear for their annual get together.

Both therapists had served in the military, were stationed at Brook Army Medical Center in Fort Sam Houston, TX, and graduated from their RT school programs in 1973. In Leidich’s case, that was the program at St. Joseph’s Hospital — the same program that Dean Hess and Garry Kauffman also graduated from.

But to Galvin, Leidich’s biggest contributions to the profession came from his devotion to educating only the best RTs, mainly at Harrisburg Area Community College (HACC), where he spent the lion’s share of his career, first as program director and eventually as chair of the department of allied health & human services. When he retired in June of 2012 he was named a Senior Professor Emeritus.

“His students would consistently perform in the 90+% range on their credentialing exams,” said Galvin. “He always set the bar high and demanded exceptional performance from his students . . . Brad cared about his program, his students, the patients we serve, and the profession of respiratory care. He took great pride in making respiratory care education exceptional.”

Brad Leidich’s dedication to education made it only natural that he would be tapped for a leadership role at CoARC. Named a Commissioner Emeritus in 2019 for his major contributions — which included a stint as president from 2015 to 2017 — he was highly valued for the role he played as a site visitor and his general expertise in the accreditation arena.

According to CoARC CEO Tom Smalling, PhD, RRT, RRT-SDS, RPFT, RPSGT, FAARC, even after retiring, Leidich never pulled back from his devotion to serving CoARC and helping programs. “He would spend hours talking to key personnel or reviewing documents or working on projects that the Board assigned to him,” said Smalling. “Everything he did was at 110% and he did it all unconditionally and with a contagious smile.”

Smalling went on to say that Leidich had a positive impact on the careers of many RTs and he only regrets that he didn’t get to know him earlier in his life. “I know this sounds a bit cliché, but he was one-of-a-kind,” said Smalling. “He poured his heart and soul into CoARC and our profession.”

Current CoARC President Kevin O’Neil, MD, MHA, FACP, FCCP, agrees. “I met Brad when I joined the CoARC board 11 years ago and quickly came to appreciate his ‘corporate memory’ for the profession and his unfailing dedication to respiratory therapy education,” he said. “It is difficult for me to imagine CoARC without him. I personally will miss his laugh, sense of humor, and most importantly, his friendship.”

Bonding over site visits and more

Bill Galvin would go on to work with Leidich on the CoARC Board of Commissioners and says their already strong bond grew even tighter. “Brad was very instrumental in advocating for me to join the Board in 2017,” said Galvin. “He mentored me and was my ‘go to’ guy whenever I had questions or concerns regarding my role as a referee, the interpretation of a Standard, the review of a self-study, or a difficult site visit issue.”

He always appreciated the help he got, crediting Leidich with a thorough understanding of the accreditation process that took the profession’s historical perspectives into account. “He was respected for his opinion and for his level-headed thinking on some of the more controversial issues facing our profession,” continued Galvin. “Quality RC education was at the core of his beliefs, and he was the consummate professional. The guy cared about our profession and wanted to see it thrive and evolve.”

While site visits have always been known for their ability to cause angst among program faculty, Galvin says Leidich viewed the process as a chance to make respiratory care education even stronger. “Brad was never about finding fault, blame, or nit-picking programs for shortcomings or inadequacies,” he said. “Sure, if he saw something egregious, he could be a pit bull and would certainly hold programs accountable, but for Brad it was about helping a program improve.”

Galvin shared a humorous but poignant story regarding a site visit that he and Leidich did a few years ago. They had gone out to at a Mexican restaurant after the day of meetings. It was a no frills place that served cafeteria style, as Leidich always insisted that they keep expenses as low as possible for the programs that they served.

“Dinner for both of us may have been a total of $30 and that was non-alcoholic drink, tax and tip,” said Galvin. “Unfortunately, I did not get a receipt.”

Leidich asked him for it the next day so he could wrap up the report and submit the expense report. When Galvin told him he would just cover the cost since he forgot to get it, Leidich insisted on driving back to the restaurant — a 30-35 minute trip — to get it.

“That was Brad — always playing by the rules, fair, ethical and honest to a fault,” said Galvin. “Brad was ‘the real deal’ when it came to doing the right thing and it’s something that I always admired in him.”

Despite his expertise and accomplishments — in addition to the Kendall award he received the Pennsylvania Society for Respiratory Care Lifetime Achievement Award, was an honorary member of the Lambda Beta Society, and earned FAARC status from the AARC — Leidich remained humble, said Kauffman. Leidich proudly shows off his catch.

“While Brad was involved in many state society and CoARC activities, he never wanted the spotlight,” he said. “He wanted our profession to advance and gladly gave the spotlight to others.”

Garry Kauffman last saw Brad Leidich just days before his death, while the two enjoyed their annual “Respiratory Therapists and Friends Float Trip,” an excursion that started as a serious fishing expedition and ended up being more of a time for friends and colleagues to enjoy each other’s company.

After having to cancel the trip due to the pandemic for the past two years, the 2022 trip, which marked its 40th anniversary, was spent going through hundreds of photos taken over the years.

“We parted ways this past Sunday to return to our respective homes and we texted each other that we arrived safely and ‘back to civilization’ as we called it,” said Kauffman the day after Leidich passed away on June 13. “Vicki, his significant other, texted me that Brad had passed while mowing the lawn and I couldn’t believe it.”

Garry Kauffman, Dean Hess, Bill Galvin, Tom Smalling, and Kevin O’Neil join the hundreds of other therapists who were directly impacted by Brad Leidich — and the thousands more who were indirectly affected by his leadership — in mourning the loss of this influential member of the respiratory care profession. Back Together Again, Summer Forum 2022 Delivers 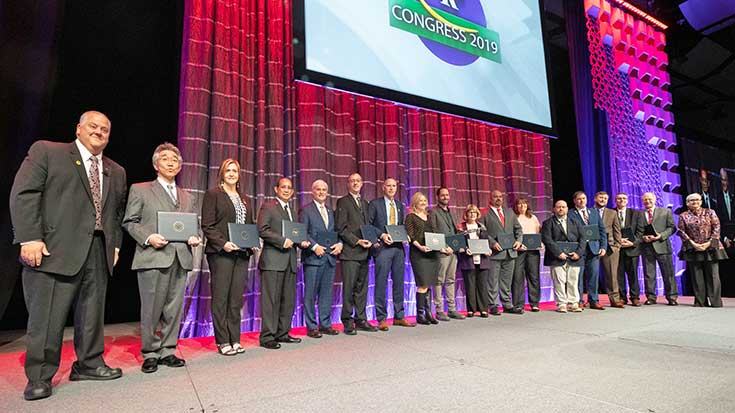 Seven AARC Members Featured in the Media this Week

Members Spread the Word About RTs