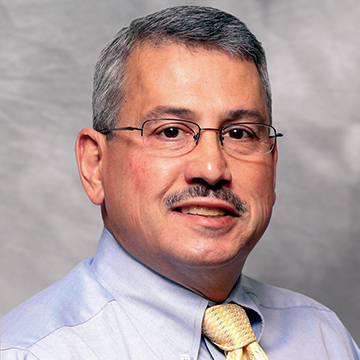 I have been an AARC Member since 1983. Since that time, I have been actively involved with the Louisiana Society Respiratory Care on a Local, State, and National Level.

I will continue to abide by the AARC’s vision to adhere to their mission as a representation of the practice of Respiratory Care. I will remain active in supporting the goals and principles the AARC has established over the years. To be more specific, I will continue to support the AARC Horizon Goals presented by President Schell. Currently, my role as a PACT Member is to collaborate for the achievement of success in one of our target areas of practice, which is advocacy provided for the patient. Along with proper advocacies for the patient, we want to assure that Respiratory therapists are providing proper care to these patients.

It is important that as an organization, we move forward with the Horizon Goals to uphold the standards we have established and continue to grow in a positive direction.

The challenge of increasing Membership on the State and National Level is one we face daily. One main reason is a lack of knowledge about the advantages of owning a membership with the AARC. Educating individuals on how being a member not only benefits them, but it benefits the organization by promoting and protecting our profession. In addition, there are roadblocks set up by Professional Leaders which have become barriers to increasing our membership and these need to be conquered.

In my opinion, students are our greatest assets and tool. They are the future of our Profession. As an organization, we need to engage and motivate them early in their career to become ambassadors for Membership and help them develop a Grassroots Network on the Local, State, and National Level.

I believe the AARC House of Delegates Student Mentoring Program has helped to motivate students and to promote Membership. I have heard students express their gratitude for being able to attend and see the work of the Profession being done during this Meeting. They witness firsthand the hard work of the Respiratory Therapist working together as a team to move the profession forward and how the AARC is actively working for the good of the Profession.

What do you consider to be the greatest opportunity for the respiratory therapy profession and what are your ideas to help realize this opportunity?

To promote Advocacy of the Profession by engagement and mentoring.

It is imperative as professionals we ensure and sustain our value and importance throughout the healthcare arena and to continue to prove our indispensable roles as Respiratory Therapists. We need to be at the forefront of the ever-changing world of healthcare. We also need to communicate with our State Affiliates and their Membership, the importance to align with the AARC in order to promote and work towards achieving the Horizon Goals.

We as an organization, need to continue to deliver AARC President Karen Schell’s theme of “plant the seed and grow individuals and our profession would flourish.”